Everybody loves lists, and we'll no doubt be inundated with them in the coming weeks. I may even indulge myself if I find the time to come up with something interesting. In the meantime, here's Gamasutra's:

5. Consolidations
4. Catering to the Wii Audience
3. The Rise of the Shooter
2. Indies Going Major
1. Mainstreaming of Handhelds 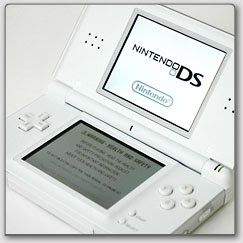 Spot on. With Activision and Vivendi merging, BioWare and Pandemic being sucked into EA (and nothing but good things being heard from all parties) number 5 seems rock solid. Number 4 is something that's been talked about all year, and it was definitely a topic we brought up on 1UP Yours a lot too. For all the trash talk about games like Carnival Games, and My Word Coach - they seem to be selling remarkably well, and for every weird choice like Jenga, there's a genuinely interesting game like Cranium Kabookii. You can't argue with number 3 after the success of Halo 3, or Call of Duty 4. As for the indies going major, at number 2 - perhaps a more apt discussion is the platform holders' willingness to embrace and promote the indie scene. Games like Everyday Shooter, and flOw have not only proven successful, but have already started influencing other products (not least of which, stuff on the Wii.)

If I had to come up with the most significant thing of the year, I have to agree with Gama's "mainstreaming of handhelds." Who would have thought we'd see grandma's, aunts, uncles, moms and dads all playing DS games this year? Who would have thought that so many experiences (often dismissed by "enthusiasts" as non games) would have helped push the platform to greater and greater heights. Handhelds did well, but let's not beat about the bush here; the DS may very well be the most significant piece of videogame technology this year. Hell, not this year - maybe ever.
Posted by Unknown at 2:43 PM