Game of the Year

OK...so after pontificating very, very briefly on 11 of the games I played a lot of this year, I guess it's time to talk about the four games I didn't mention, and cast my tiny pebble into the ocean of opinion that is "Game of the Year 2007." I purposely didn't mention Halo 3, Call of Duty 4, Bioshock, or Super Mario Galaxy the first time around, because let's face it (along with Mass Effect and Orange Box) they're pretty much all anyone's talking about right now. Although these are the highest profile titles, what's most important about this year is that there have been one hell of a lot of really good games that deserve to be remembered along with the big-budget, high-profile stuff. That said, no one can deny the way the bar was raised this year and whether you personally enjoyed the blockbusters or not (and personally, there were a few of them that I couldn't quite get it up for quite the way I'd hoped) there's no escaping the impact they had on gaming in general, and the fact that they were all exceptionally good. Amazing new features, unbelievable visuals, innovative new ideas, noticeable improvements in story telling (about bloody time) and emotional range, and even some good scripts. The four games above were all incredible...but when push comes to shove, and all things considered and all that - I think the real "game of the year" (and again, this is purely a personal, subjective view) was Super Mario Galaxy. It was very nearly Mass Effect, but ultimately I think that comes a close second.

I'm no Nintendophile by any stretch of the imagination, but the appeal of Mario is undeniable. Galaxy did what few other games have; it felt new, and imaginative, and whimsical, and created a world of magic and fantasy that recalled the days when all videogames felt that way. It uses the Wii controls in a way that's fun, but not gratuitous, and it is one of the most beautifully paced games I've played in years. After easing you through some relatively simple challenges, it whacks you with something crazy hard and infuriating...but only for a short while. And then it rewards you with something exciting and almost mindless. It's truly rewarding all the way through, and for that reason it's incredibly hard to put down.

I love playing it, and my kids love watching it...and now they're getting used to it, they're starting to want to do the thing with the second Wii-mote too. And what more could I want than that? 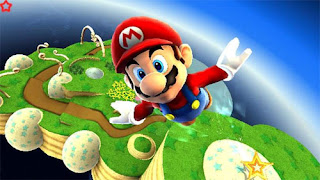 You're making me feel great about the Wii that's headed to my home via the mail as I type this and the copy of Super Mario Galaxy that sits on my shelf, waiting to be played.

(For the uninformed or those who have yet to hop on the wagon, SMG is on sale for $37 at Target this week.)

I have a 4yo son and a 3yo daughter - as well as a non-gamer wife - and it sounds like this is going to be just the thing.

Being a gamer dad, I find it interesting that SMG will be my 2-year-old daughter's introduction to Mario.

When she gets a bit older, I'll be able to regale her with stories about how Mario used to be 2D, "and that was good enough for us" I'll add while whittling myself a Wii remote on the front porch.

I put together my own 'picks of 2007' where I chose your second selection, Mass Effect, as my own fave game this year.

I have to admit, the book tie-in is adding a lot of flavour to an already great game.

My boys are 2 and 4, and my youngest, Jack is enthralled with Mario right now. The first time I played it with them, they didn't seem to care. Will even called it "boring" but now they demand to sit and watch. We went out for pizza tonight, and while we were waiting for the waitress, Jack was bouncing a toy around and pretending my body was one of Galaxy's three dimensional levels. When he got to my head, he got all excited and said "I got the star, daddy!"