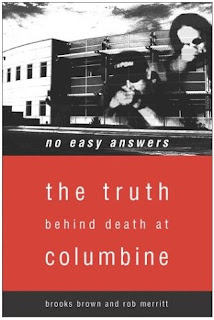 At a time where there's a lot of serious screwed up stuff going on, and people blaming videogames for all kinds of evils, it pays to get some perspective. Lots has been written comparing things to Columbine, and lots has been said by people that really have no idea what they're talking about. A good friend of mine really does know what he's talking about; because he was there. To help you understand what happened, and what it was like, he wrote a book about it. You should read it. I read it a while ago, and it moved me pretty deeply, particularly as a father. Mrs. D just got done with it too, and was moved to tears almost every night while reading. For those of us that have forgotten what the pressures of being a teenager were like, or what those pressures can evolve into, this reminds us. As Publishers Weekly put it;

The question of why Columbine seniors Dylan Klebold and Eric Harris killed 12 classmates and one teacher before killing themselves is personal for classmate Brown, who was friends with both boys. However, this search for an answer is unlikely to provide closure for either Brown or others concerned about preventing future acts of school violence. The author, who appeared on Oprah and other shows after the killing spree, writes conversationally, as if he were being questioned by a talk show host and asked to describe growing up with Klebold, why he thinks Harris told him to go home right before the shootings and what can be learned from the gruesome event.