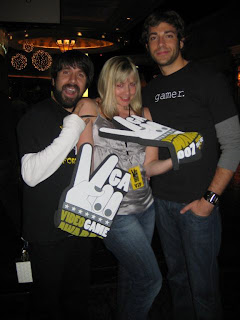 The Spike Video Game Awards aired on Sunday night, but filming was on Friday. Zoe (What They Play editorial manager) and I were lucky enough to fly down to Vegas (along with Mrs. D) for a night to watch the filming, and come away with tales of craziness, drunkenness, debauchery, and expensive bar bills from the Wynn.Vegas was packed, as ever, in part because of the VGAs, but also because of the big Ultimate Fighter thing on Saturday. Rumor had it that tickets for that event were going for $25,000 or something crazy. There were a lot of Brits in town...all of which were presumably there to overspend on watching a couple of guys kick the shit out of each other.

The VGAs themselves were much better than they have been for the previous four years. Filming was less rushed, and a lot of "humor" seemed a lot less forced than we'd seen previously. It still wasn't perfect by any stretch of the imagination, and the MTV Networks insistence of forcing pop culture where it's not wanted/needed still makes for a slightly uncomfortable mash-up of video games, hip-hop, rock and roll, and whatever is hot on TV. Thankfully, the game creators were given a little more prominence this year - with creative leads and producers called in to collect awards, rather than just voice actors and musicians.

Kudos to Patton Oswalt and the Foo Fighters for standout performances on the night. Not sure what was up with Kid Rock's performance though. Presumably he was just product placement, or something. The opposite of kudos go to Tila Tequila, who was an embarrassing wreck squealing about being "tri-game-ual" in her love of 360, PS3, and Wii. It was just pitiful. Who the hell is she, anyway? Also, there were foam fingers on every chair.

The red carpet event leading into the event was surprisingly fun (if you ignored the tedious "interviews" everyone was forced to give), and we spotted "Chuck" stars Zach Levi and Josh Gomez (whose video game roots run so deep that he's done voice work for Final Fantasy X-2, Call of Duty 2, and Armored Core 4) playing Rock Band. Zoe, so enamored with the duo, raced to get a picture with them. Thankfully they seemed happy to oblige. (That's her in the photo, in case you hadn't figured it out yet.)
Posted by Unknown at 10:36 AM

I was searching for information on the upcoming Spike Video Game Awards, and was hoping to find out some more info on it here. Any recommendations? Based on last year's VGAs I’m quite interested if they’ve learned from past mistakes, though we'll all find out next month.

Also, to hold myself and my friends over until then, I compiled a video playlist of (friggin awesome) game trailers for the titles that are predicted to emerge victoriously (based on my research, reviews, buzz, etc). I think you and your readers might find it enjoyable as well...perhaps even more so than attending the show itself :) Check it out, let me know what you think, and feel free to share it.