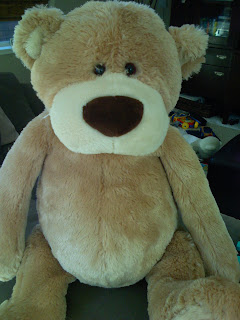 I've been home for the holidays for about 10 days now, and between games of Madden and various Leapster cartridges, my boys and I have been playing Super Mario Galaxy pretty religiously. Will, my oldest helps collect the star bits with the second Wii-mote, and Jack watches and makes suggestions. We make a pretty good team, and have more than 20 power stars so far. It's been great, and as I've mentioned before it's triggered some things in the kids' imaginations that have been fun to watch.

Something new happened today though. For Christmas, Will got a new teddy bear. He'd asked for one as a "new friend" for his other bears, and was quite excited when he tore open the wrapping on Christmas day. Will has been reluctant to name any of his bears in the past. Beyond "brown bear" and "white bear" he was unwilling to come up with anything else because "they can't talk and tell us their real names, and I don't want to call them the wrong thing." Cute, huh? Anyway...this morning, he told me that he had decided to give the new bear a name.

Haha, I think my favorite thing about this blog is hearing about your little kids. Because they sound so cute and VERY smart from what I've heard.

PS: I think you and Mis.Davison chose great names for your two boys.

just awesome. And, it could be the photo - but that looks like a huge-ass bear.

Another great read, John! This post actually inspired a rather lengthy response from me, which I just turned into a blog post instead of posting it all here.

Basically, I just talk about how the Wii, of all things, allowed my wife and me to peek into our two-year-old daughter's world.

Thanks again for sharing with us!

"they can't talk and tell us their real names, and I don't want to call them the wrong thing."

Well, that's just about the most awesome thing I've ever heard.

That was a pretty incredible conversation. Every now and then you have a chat with your kids where you realize that their understanding of the world has expanded again, and that was definitely one of them. He was completely sincere about it, and it blew me away utterly.

Child and parent interacting with each other with video games as the foundation. The 21st century All-American (Kind of) family I can see the Norman Rockwell painting in my head .... beautiful