What a week. What a year. I think I've been away more than I've been home so far this year, and thankfully next week things are calming down a bit. Earlier this week I was in NY, and my schedule was packed... 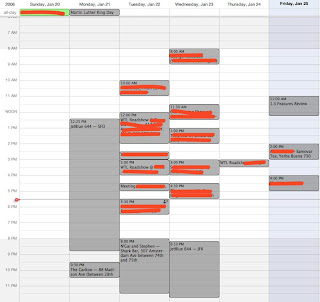 Note to self: 7 meetings in one day, particularly when they're spread out all over the city, is probably a bit much. We had a very productive time, meeting with agencies, publishers, and media contacts, but I'm so glad to be home (you'll notice my Thursday was nice and wide open). Word on What They Play seems to be slowly spreading, and everyone we met with was very supportive and very positive, which is always nice for the ego. We need to keep growing our traffic, that's clear, but things are climbing quite steadily and we're hitting all the targets we set for ourselves in the first few months. Last week's hits on Yahoo and CNet certainly helped boost our traffic a bit, and we have high-hopes for the promotion we're running right now, to win a Wii, PS3, and Xbox 360. Excuse the shameless plug...but click on the damn thing, will ya? KTHNX

Ooh, the Gamespot thing I did last week is up, too, I just realized. It's 75 minutes long...which is, y'know, incredibly long, and may put you to sleep (particularly the parts where I'm talking) but here you go, in glorious embed-o-vision. That would be me on the left. Inexplicably choosing to wear glasses that day. Do you think it makes me look smarter and sexier? No. Didn't think so.

So the Gamespot thing was, how shall I say...boring. Very promising from the description, but it just never comes together.

Congrats on the growing business. Best of luck.

I know! 75 minutes - who has time for that? I thought they'd chop it down and just leave in the interesting bits, but they basically just ran the whole thing as is. Would've been a great, oh I dunno, 20 minute thing maybe.

Well, if you didn't have the glasses on, you wouldn't have fit in with the rest of the kids. It's spec-o-rama!

Thanks for sharing this, by the way. I feel quite refreshed after the nap.

Also, looking skinny, my man. Those trips to the gym are serving you well.

Flattery will get you everywhere, Susan

I saw the Gamespot interview a couple days ago. Actually very interesting. I thought the idea you brought up about how the rating system should have a middleground T and M was a good idea.

I hope WhatTheyPlay gets really popular and we all miss you at 1up.