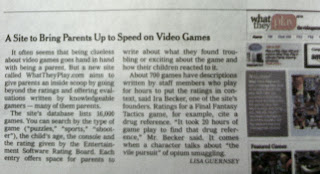 OK, so I didn't completely jinx it the other day. The piece did run in today's New York Times, and it turned out pretty good - although I'm not completely sure what the "vile pursuit" comment is all about regarding the opium trade. Neither Ira or I have a particularly strong stand on 19th century drugs, but we do acknowledge that drugs are bad, kids. The story is online here, and it's also in the print version too.

The DL.TV thing I talked about last week is up today, too. I can't embed the player for some reason (either I'm too stupid to work it out, or they don't offer the functionality) so here's a good old-fashioned link to it. There's nav to the different sections of the show across the bottom. Thanks to Scott for inviting me on, and letting me give the whole pitch pretty much unchallenged.

We also got another hit today on Seattle-based site ParentMap, in a piece called "Game On! Choosing video games for little kids" in which I say nice things about games, and a pediatrician doesn't. It's an interesting mix of opinions and gives a pretty good snapshot of the differing thoughts on games these days. Something that always frustrates me about a lot of observations on kids and family entertainment is that they tend to be overly academic. I like this piece because it goes some way to address that. Something I've noticed is that a lot of coverage tends to leave out two important aspects: the kids themselves, and the common sense of the parents concerned. There are plenty of people that will tell you "games are bad" in one way or another, and (not to pick on Dr. Sahs in this case, but she's not alone) note that kids don't communicate while playing, or whatever - but they a) rarely acknowledge that kids don't communicate when they're reading, or any number of other solitary entertainment activities either, and b) fail to acknowledge that there are a lot of gaming experiences that are social, and that ultimately it's up to parents to be as engaged with video games as they are with anything else. All said, the one thing that both Doctor Sahs and I do completely agree on is that “Parents need to feel that it’s OK to say no.”
Posted by Unknown at 12:41 PM

You've found parents publications to be overly academic? I suppose it's all a matter of perspective, but in my experience parents publications gravitate heavily toward the emotional side of any story, the sensationalistic part, if you will. They are quite adept at giving parents reasons to worry and be afraid, and rarely open to anything that is a rational, simple way to handle something.

An example: For a parents mag, I was interviewed regarding how parents should treat their teenagers regarding privacy. Their argument was that the columbine shooters seemed to have a great deal of privacy and this allowed them to commit their acts. When I responded and told them that the parents actually did not give them privacy, but instead actually looked the other way when explosives, guns, and the like were found, they asked me if Eric hid the explosives in his room.

I told them simply that parents generally need not worry if their child is going to shoot up a school, but rather they needed to use very simple common sense - if you find you sons bomb-making kit and his hate site where he wants to blow up people - get your kid some help.

When the final article printed, my point didn't even make it, instead giving the mag a chance to terrify parents railing about how eric hid explosives in his room and every parent needs to search their childs rooms constantly.

Not the parents publications, I'm talking about a lot of the people that position themselves as "experts" on parent/kids entertainment on tech.

Ahhh yes - they all seem to fail epically at being 'practical'. We should start calling ourselves experts and see how long that lasts :)