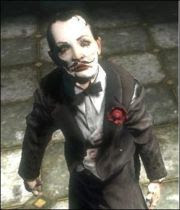 I started this Klosterman knock-off "best moments" thing last month, and said I'd probably amend it...and here I am, three weeks later doing just that. The catalyst was chatting with Luke over IM about the whole idea, and talking about how all these wonderful little moments are far more important than just declaring something a "Game of the Year," or (even moreso) some kind of "XXXXX of the Year." Sure, the whole awards-giving schtick is an expected part of the seasonal editorial cliche catalog, but is it ever really that surprising? As with many things in the games space - tackling it in a different way often leads to interesting results...usually in direct contradiction to what the audience otherwise says it wants. I can remember a few years ago, deciding to completely do away with multiple categories for "Game of the Year" in the Official PlayStation Magazine, and simply declare one single game the hot-shit product. It would be different, it would be a talking point, and it would be a direct response to all the readers that said they thought endless awards were pointless and boring and cliched and [add increasing level of insult here.] Surprise, surprise - when we did it, everyone complained.

Anyway, I digress. Some extras (more to come, I'm sure):

- The whole creepy Sander Cohen portion of Bioshock, and the way it twisted and entwined the narrative with the character development. Few parts of the game fully delivered on the pre-release hype of how advanced the characterization would be in the game, but this whole segment did a great job of showing how a dystopian shithole could unravel the mind of one of its inhabitants.

- The way that the use of gravity completely changes the way you think about platform games in Super Mario Galaxy. It's not just a matter of world-building any more, but a matter of the way a three-dimensional space is presented to the player. Watch for knock-offs hitting by the summer, and (in many cases no doubt) completely missing the point by just making upside-down levels.

- Not so much a gameplay thing, as it is a phenomenon of characterization; but the way you get oddly attached to the weighted companion cube in Portal is just incredible.
Posted by Unknown at 3:03 PM

Sander Cohen's audio diary is perhaps the singlemost disturbing one in the entire game. I was really genuinely rattled after listening to that.

I really like the ice splicer's "Iceman" audio diary.

My little brother come into the room when I was listening to it. And now he yells out, "THE ICEMAN FUCKING COMETH!" All the time...I'm a little worried...

I should really go back and finish Bioshock. I was nearly there. I was putting all the bits of the Big Daddy together, and I just got distracted by all the other games coming out.