Thanks in no small part to fact that Anastasia at Ypulse has asked me to help put together a half-day mini-conference on the subject, I've become quite the "casual" gamer lately. The conference is titled "Casual Gaming For Tweens & Teens" and runs from 9am til lunch on July 14th in San Francisco, with the goal being to tackle a broad range of issues that show how teens are playing games online, what they're drawn to, and how they participate in the communities around them. It's certainly not what I'd define as my "core competency" (casual games, or conference organization for that matter) but given that my casual gaming in the past has been exclusively at the mercy of the Popcap folks, I welcomed the opportunity to do some research. As I find stuff I really enjoy, or am particularly impressed with I'll blog about them here, and you can either try them out for yourself, or simply tell me I've gone soft in the head, or barking mad, or have lost my senses. Or both, for that matter.

Long-time friend and former co-worker Lee Uniacke just started working at casual gaming hub Kongregate recently (plus, I can see their offices out of my window) so I thought I'd start there.

The highest rated "strategy" title on Kongregate is Desktop Tower Defense 1.5, a simple and great-looking strategy game that has you placing gun turrets and rocket launchers on a table to stop little critters called "creeps" from moving from top to bottom, or left to right. You have 20 "lives" (meaning, you can let up to 20 creeps move across the desktop) and accumulate cash by zapping the creeps so you can by more, and more powerful weaponry. 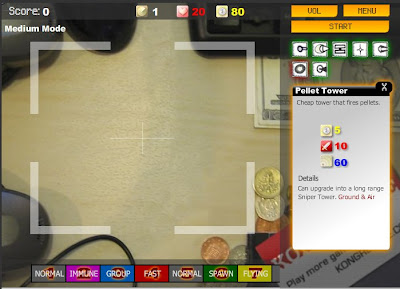 This is how things start...a static, empty desktop and a selection of turrets up there in the sidebar on the right. Basic turrets are cheap, whereas more specialized stuff (like air defense things) are considerably more expensive. 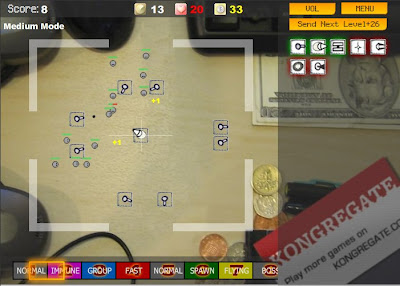 As things start, the key is to catch the creeps as they move across the screen. You don't have to work too hard at it...just catch them as they trundle their their way in two directions. Early on, you're just trying to get in the way, and get some good shots off - but the long term strategy is to funnel the creeps in the specific direction that you want them to go, so you can pound them with your mighty weapons along the way. The creeps are motivated little fuckers, but they apparently have no real sense of self-preservation, as they don't ever try and dodge shots, or move to get out of the way. 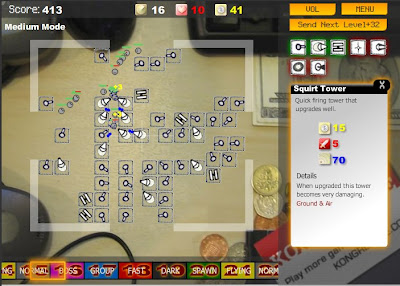 Here, you can see that as the creeps come out of the openings on the left, and at the top, they have to find their way to the simple "tunnels" I've created in order to reach their exits. The basic turrets pop little shots at the creeps, while the "squirt towers" (the triangular ones) fire larger blobs of ink, and do so more quickly. The things that look like rocket launchers, are (shockingly) rocket launchers. As the levels progress (you can see what's coming in the ticker-tape across the bottom) you have to toughen up your turrets, and spend coins on upgrading them so they'll shoot faster, or fire more pellets/blobs/rockets/whatevers.

If, like me, this is the kind of game that's right up your alley, I guarantee that you'll be seeing this thing in your sleep after your first couple of games. It's shockingly addictive, and perfect for killing 10 minutes or so when you don't feel like booting something more elaborate up.
Posted by Unknown at 6:44 PM