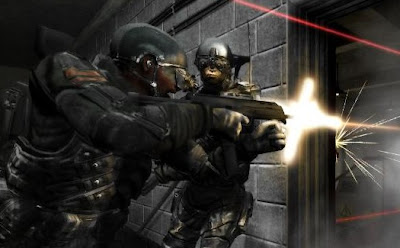 I haven't "reviewed" a game critically in a while now, so it was actually pretty refreshing to really sink my teeth into something this past week when Nick over at 1UP asked me to review Rainbow Six Vegas 2. I was a big fan of the previous game, and have been looking forward to the sequel for a while. The link is right here, but here's a quick summary.

- The AI is still a little broken in single player
- Even though it's a narrative sequel, it doesn't do it the way you're probably hoping
- Two great new mulitplayer modes
- Co-op story mode down to 2 players, but it has Gears-style jump-in, jump-out gameplay
- You can invite friends into ranked games
- It uses the XP (ACES) system for leveling up your character in single player now too

Overall it's good stuff. Definitely more for the R6 fans than anyone else, but there are plenty of us out there.
Posted by Unknown at 5:52 PM