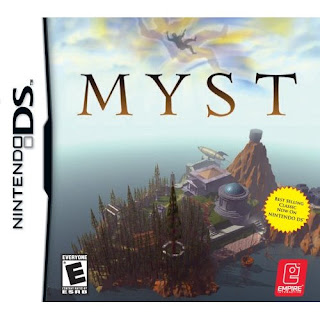 Nick from 1UP pinged me yesterday asking if I'd play through Myst on the DS for them. Apparently there weren't many "volunteers" to review the thing, as everyone remembers it being such a handful. I don't think I've actually played it myself since the original was released on the Mac back in 1993, and I'm pretty surprised that Empire has chosen to produce such a literal port for the handheld. As far as I can tell it's using all of the original 8-bit era graphics, and they're using the same approach to the gameplay as Cyan did, too...there are no instructions, or tutorials, and there's no dialogue to break you in gently. There are no enemies, no time limit, nor any need for speed or dexterity.

The interface has been tweaked a little; you use the stylus (obviously) to interact with the environment, and the upper screen is used to convey information and allows you to view magnified images from the environment (reading signs, and books, etc.) There are some new mini-tools too; the magnifying glass helps with inspecting clues, there's a camera for snapping certain things for future reference, there's a simple notebook that uses a typewriter metaphor, and a map that shows the whole island. The DS version also includes the "new" Rime Age that was previously seen in the PSP version of the game, as well as "bonus" content at the end of realMyst (the 3D, remake that Ubisoft released.)

I only started playing this morning...but as far as I can tell, it's a full-on version of Myst, quirks and all. No doubt any of the 12 million people that played it 15 years will get a kick out of playing through it again, but you do have to acclimate yourself to the old-school UI , and the almost obstructive approach to letting you in on whatever it's trying to get you to do.
Posted by Unknown at 11:32 AM