Space Invaders Infinity Gene and its evolution through music

I've been pretty thrilled with Taito's Space Invaders Infinity Gene on the iPhone even since before it came out. Just the idea of an "Extreme" style Space Invaders title on my favorite device was enough to make me smile and wibble on endlessly about it to anyone that dared raise the subject. Having spent a week with the game now, I'm still just as happy – and although I've not worked my way through every stage it can throw at me, I've become hugely distracted by the way that it will custom-generate new levels based on music pulled in from my iPhone's music playlist. Initially I'd dismissed the idea as just a neat little gimmick that would add a little extra to the game's lifespan, but now I'm completely hooked on throwing all sorts of different music at it to see how it would interpret them.

My first try was with something that seemed appropriate vibe-wise, the Sam Fog vs Carlos D. Main Mix of Nine Inch Nails' "Every Day is Exactly the Same." Little glimpse into my music taste there, I guess. It kicks off with an almost robotic and repetitive bass line that slowly swells to introduce new audio themes and subtle changes, while maintaining a constant rhythm. The resulting Space Invaders level was beautiful, complex and unbelievably difficult.

The level opened with a simple blue to gray fade in the background, which then revealed itself to be a form of tunnel with undulating walls that pushed into and out of the main play area in time with the changing pitch of the bass line. After and initial wave of very basic invaders, the action soon exploded into a swarm of violence with the first crash of a cymbal and the introduction of more complex drum patterns. The screen was filled with hexagonal "mines" that I had to cut a path through, while avoiding fire from both large and small invaders. 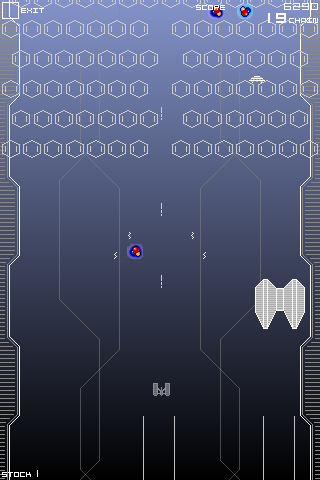 From here, the game started to bring larger and larger dreadnaught style ships into the action, the likes of which I had not yet seen in the "normal" gameplay. Rather than drop in from the top of the screen, many of them would slide in from the sides, or even up from the bottom of the screen, firing endless barrages of destructive, solid-looking laser beams. As the music continued to swell, the game started to introduce solid objects into the "tunnel" it had formed, and began to drop in larger and larger enemies that would arrive as though dropping in from above, and behind my little gunship. 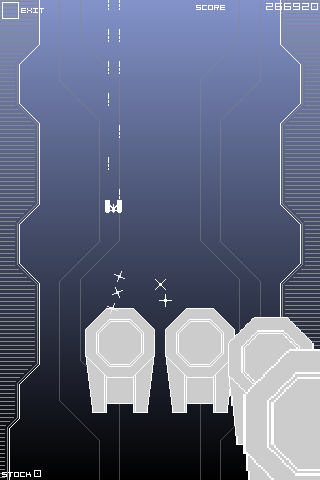 After this, things got even crazier; it would start throwing in lines of "gates" that blocked the whole "tunnel" that had formed, requiring me to shoot at specific lock points to open them and let me through the environment that was forming ahead. The whole thing was just fascinating. I've played the same level over and over again just to try and spot all of the cool things that it's introducing. It's not just a lot of fun, but the way that the game evolves, even over the course of a single piece of music, is a delight to watch.

I've since tried with a number of other pieces of music. A lengthy DJ Tiesto mix of "Adagio for Strings" resulted in an almost blinding, fast-paced barrage of invaders, while a Wilco track brought a swirl of tiny ships interspersed with gigantic battleships pounding me with star-shaped missiles during the chorus.

Not only does the gameplay if Space Invaders Infinity Gene evolve over time, but so has my relationship with it. Now I'm hunting for music with different rhythms and textures to see how it will respond. How about my wife's Afro Cuban All-Stars album? How Rodrigo y Garbriela's "Diablo Rojo" be interpreted? Some Metallica, perhaps? This game's life just extended way beyond my expectations.

thanks for bringing light to this cool feature!

I wonder how it handles Mody and Slipknot?!

Wow, that sounds awesome. Custom levels generated from music tracks were the reason I bought both Vib Ribbon and Audiosurf. Sounds like it worked out pretty well in Infinity Gene... Man, I wish I had an Ipod Touch!