Moving on from GamePro

Earlier this week, I announced that I was going to be leaving GamePro to do something new. My last day in the office was this past Wednesday, and it was sad to say goodbye to everyone. I had a great, if very brief, time working with the team, and I feel like we achieved an awful lot in a very brief space of time. We changed people's perceptions of the brand, completely rethought the editorial direction and design of the magazine and website, and hopefully got people thinking about how games media can evolve in the years ahead. I was given a tremendous amount of freedom and latitude by the management at IDG, and for that I'm extremely grateful.

My time at GamePro certainly had an impact on me, and judging from the little in-jokes on my leaving gift (below) it seems my many little quirks and foibles were clearly noticed by everyone... 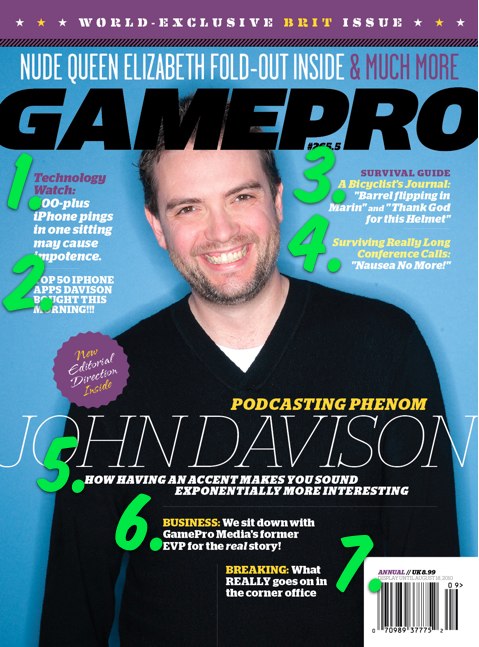 1. An easy one... I've been pretty into iPhone games for a while now, and I still get requests on Twitter for an "iPhone game of the week" based on something I used to do on the 1UP podcasts a few years ago.

2. This one's not about the line itself (although there were some download-heavy mornings)...it's the four exclamation points that are important. Fairly early on in my time at GamePro I instigated a blanket exclamation point ban on all content, and particularly on all headlines because they were starting to get out of hand. I soon escalated this to a blanket ban with a $1 fine for any individual usage. Not exactly my most visionary moment, I'll concede. It was both necessary and effective though.

3. While training for the Marin Century bike ride this summer, I was run off the road while about 20 miles from home and went over the handlebars at 25 mph. I landed on my head and cracked my helmet. Fortunately I was just bruised, and nothing else was broken.

4. Sometimes, conference calls can be very long, and very frustrating. On one particular occasion I was feeling a little under the weather, and that coupled with the frustration directed at some... let's call them "less progressive" individuals... led me to start feeling a little nauseous, much to the amusement of everyone on my end of the phone.

5. It's true...sometimes the Brit accent can help in unexpected ways.

6. I hate, hate, hate introductions/decks to interviews that start with "we sit down with..." because it's lazy and cliched and you see it so often in magazines and on websites. Not just video games stuff, but everywhere. Also, more often than not, it's not true either. I know "we sent emails back and forth that were subsequently sanitized by an over-zealous PR person" doesn't have quite the same ring, but if we didn't "sit down with" the subject, let's not say we did. Apparently my vehemence on the subject didn't go unnoticed.

Sorry to see you go Sir. Since your tenure, I have purchased more GamePro's (2) than in the entire rest of the magazine's run (1).

I imagine you have the greatest confidence in your now former editorial staff to keep up the magazine's quality in writing and design. Are you, however, at all concerned about Gamepro maintaining cooperation in negotiating coverage without the appeal that a respected name at the helm—your name—has to game publishers?

Gamepro has taken on a noticeably more mature and even tone than the competition under your stewardship, and it's easy to imagine that such a voice might fall out of favor; that when it comes time for publishers to seek out coverage, those that speak only in admiring tones might be the ones they go to first.

I don't know, I just really hope this renewed Gamepro I've returned to (after an eight year hiatus) doesn't get short shrift from publishers with you leaving.

Yeah, I am sad to see you go. I basically subscribed to the mag because you were involved. I really enjoyed it now I hope they continue in the same direction.

Big thanks for the useful info i found on Comentari de categoria nova.