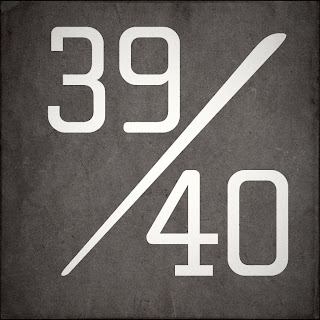 Honestly, I still haven't decided on the format for this. At one point I'd entertained the idea of trying to make a post for each year going backwards until I either ran out of years, or ran out of things of significance from that time period. Probably would have been a bit much, really.

That said, I do want to use number 39 to make some broad strokes observations of events that have happened while I've been 39. I think it's fairly safe to say that the word "tumultuous" is an apt description for the past 11 months or so. It's not often you have the luxury of using such an evocative word to describe your own life, but here were are. "Excited, confused, or disorderly" says the dictionary - yep, that pretty much does it. At least on the professional side of the house. On the homefront, the greatest cause of any disorder has been trying to manage my weight (a disastrous project I'll no doubt go into in a separate post filled with woe and self-pity) but work, notably the businesses in which I exist (media and videogames) has been batshit crazy.

Over this past year, I've seen spectacular examples of both highs and lows. I've witnessed examples of every kind of behavior imaginable;  Petulance, defiance, selfishness, negativity, and incredulity on one hand, but I've also seen boundless creativity, selflessness, intelligence, and wit on the other. I've seen people walk away from opportunity because of ego while others have sought out opportunity and defined themselves in defiance of the odds. I've seen success born out of a whim, and disaster brought about by pessimism. I've watched people find themselves and lose themselves. I've watched businesses blossom and crumble, the establishment topple, and new ideas flourish.

Significantly, after feeling like the "old man" for a while, and spending the bulk of the past few years imparting knowledge and guidance, this past year has been a tremendous learning experience. "Drinking from the firehose," as my buddy Ira liked to say back in our time together at What They Play. Yes, the last year has been one of the hardest in recent memory for me, but I've learned so much, and been able to adapt and evolve more than I could have possibly anticipated.

Hey John, I miss hearing you on a regular basis. Are there any podcasts that you frequent?

I look forward to reading this series of thoughts. I just turned 33, and have been thinking a lot about watching my kids grow up and how this stage of my life is going to play out.

I'm actually in the process of piecing together what is essentially a "pilot" for a new podcast right now. We're going to try and put it out before the holiday, see how people like it, and then roll it out weekly if it looks like it's what people want. I'll definitely post something when we start production.

That's fantastic, if you want someone to give an early impression on the pilot, keep my email handy. My daily commute affords me the time to listen to many podcasts, so I can give constructive criticism with the best of them!