I can remember playing XCOM (I think in the UK it was released as "UFO Defense, rather than "Enemy Unknown" when I played it) when it first came out in 1994, and finding it deeply frustrating and almost impenetrably difficult. It didn't so much have a "learning curve" as it did a sheer, near-unassailable learning cliff. It didn't really bother with easing you into anything, certainly didn't lead you by the hand, and given that it was the early nineties, and people still bought games in boxes, it had more than a whiff of RTFM about it. Honestly, if you didn't RTFM you were completely screwed. Never one to be blessed with the gift of patience, I soon tired of it, and moved onto other things like TIE Fighter, System Shock, Kings Quest VII, and Wing Commander III, which were all released that same year.

Quick aside on Wing Commander III…at ECTS (the European Computer Trade Show, which was the biggest event for gaming announcements at the time) in London that year, I showed up at my appointment with Origin's PR team, only to be told that interviews with the game's protagonist--Colonel Christopher Blair, played by Mark Hamill--were running extremely late. To make up for this, I was asked if I'd mind going to lunch with him, and doing the interview at the restaurant. Lunch with Luke-frickin-Skywalker? Er, yeah. That would be fine, thanks. Definitely one of the more memorable moments of my career.

18 years later, and the PR person that set that up is now a Mary Kay cosmetics consultant that my wife works with.

Anyway, sorry. I digress. Significantly. Back to XCOM. 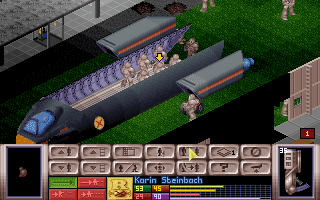 It wasn't until I'd been living in London for a while (I'd just moved from Oxford to take the reins of PC Zone) that I got sucked back into XCOM's wonderful game universe. One of my editors, Chris Anderson, would play the thing at every available opportunity. He was as addicted to that as others were to Football Manager or Doom (which had been released the year before.) He'd play it during lunch, and he'd play it until the early hours of the morning every single night. He'd stumble into work bleary-eyed and exhausted, but excited to tell us all stories of things the aliens had tried to pull on him.

If there's one thing I've always been a sucker for, it's games that allow you to share stories of truly unique experiences. It's the real magic of video games to me, and why I've always loved RPG's and adventures like Elder Scrolls or David Cage's work. I love it when you can describe a scene, and frame it with "this is how it went down when I was there." Chris' constant and relentless enthusiasm for XCOM wooed me back just before Christmas of that year. The rest of the office had become obsessed with Master of Orion (which went on to be voted most gamers' "Strategy Game of the Year" for 1994) but I got completely stuck into XCOM, and slowly fell in love with it.

Interestingly, despite losing out to its Microprose stable-mate in many "game of the year" awards that year, it's XCOM that endured as a cultural touchpoint for PC gamers. The five subsequent games and two canceled (thankfully, in hindsight) follow-ups certainly didn't hurt, but the XCOM franchise soon had to overcome a dramatic shift in fashion. A year later, when Command & Conquer came out, turn-based strategy games became desperately unhip and only the hardest of hardcore seemed to really want to talk about them, or read about them in magazines. It certainly didn't help that the hastily pieced-together (though still very good) sequel, Terror From The Deep, was unbelievably difficult.

Posted by Unknown at 5:39 PM No comments:

Back in the Editorial Saddle: This Week in Games Returns

I started writing for GameSpot again this past week. After a hiatus to adjust to life outside of a pure editorial role, I'm back in the saddle again. The guys there very kindly asked me to continue writing my This Week in Games column each week, and I'm very pleased to be doing so. Pulling that thing together each week has always been both cathartic, and a pleasant exercise as it ensure that I'm on top of the major events of the week, and how they're connected (usually.) Thankfully, it also means I won't disappear completely from folks' radar, I hope. Like a cockroach, I persevere.