When I heard of Ryan's passing, I felt completely helpless. Patrick Klepek pinged me with the news while I was at home watching a movie with the kids. I honestly didn't know what to do with the information. I felt like there was something I should do. Something I should say. But as is always the case in these kinds of situations, nothing seems sufficient.

Because of his effortlessly friendly demeanor as the host of the Bombcast, I always forget that I didn't actually know Ryan as well as I think I did. Having listened to him for years, his sharp wit had been a part of my lengthy commute for a long time. I only really got to know him at all "in real life" during and after the Giant Bomb acquisition at CBS Interactive when I became his boss. During that time he was always friendly and welcoming, and would share ideas and achievements with great enthusiasm.

I think we first bonded in any meaningful way when he enthusiastically told me about the possibility of a partnership between Giant Bomb and Cards Against Humanity. There were relatively few of us in the office at the time that really knew of the game, but we recognized in each other a kindred spirit for its particular sense of humor. He was already riffing on ideas for cards, and couldn't wait to get the Giant Bomb community involved in the creative process. 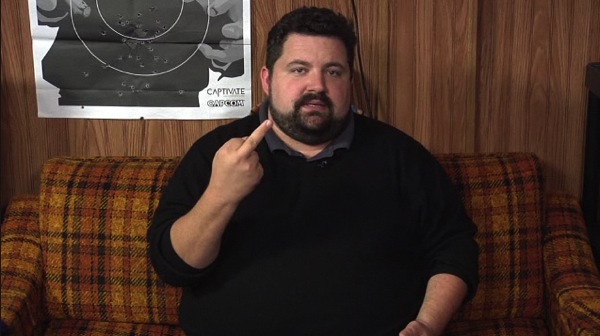 Honestly, I wish I'd known him better. And this, in turn, has made me think that there are many that I wish I knew better. Many people that I should spend more time with, many I should let know how much I appreciate them, and many that I should make more of an effort with.

As we get older and settle into our lives its easy to slip into routines that slowly exclude those that we perceive as being on the periphery. The rush home to steal moments with partners and children pushes other relationships aside, to a point  where we think, "there'll be plenty of time for that later." Often "later" never comes and we lose touch with old friends, or fail to pay new acquaintances the attention they deserve.

I never met Ryan in real life, never even interacted with him over the internet. I still feel like I've lost a dear friend. I listen to podcasts religiously, and it's such a personal experience to hear someone speak to you for hundreds of hours over the last 8 years.

It feels odd to shed tears for a man that didn't know I existed, but I consider you all my friends. I root for you, and I share in your pain when you share it with us through podcasts or your writing. I can only imagine that if my heartbreak is such just being in the periphery, the grief must be inconsolable to have know him.