Not that you asked, but some thoughts on games of 2014 and podcasts and stuff

2014 was an absurdly tumultuous year for me. If it’s all well and good, I’d rather avoid going through the gut-wrenching uncertainty and ego-shattering sense of “oh fuck, what have I done?” on the professional front if you don’t mind. It wasn’t all downs though. After spending the summer months slobbing around in my underpants, things finally got back on track, and now that I’ve got used to being a productive member of society again, I can start thinking about other, more fun stuff again. At some point, there will no doubt be another podcast. Not sure when, or what, or how, but after Garnett and I iced our show in September as we both went back to work, I’ve definitely felt an absence. Also, there’s a bunch of podcasting gear in the bedroom closet, and I keep tripping over it when I reach for my trousers.

I’m thinking maybe the next show, should there actually be one, won’t be pure games stuff. I don’t know. I’ve been collecting stories daily about the kinds of things that I really like to talk about in a Flipboard magazine that is currently very unimaginatively named GeekyCoolStuff (click the link and it’ll open in any browser, or in Flipboard if you have it) and it occurred to me that I’d love to do something just like that. Unbelievably self-indulgent I know. Needs a partner, or a group for it to really work. Garnett and I managed to pull off the recording remotely thing with the last show, but honestly there’s no substitute for recording with everyone in the same room. The energy is better, and it sharpens the wit. Using Hangouts or Skype or whatever is ultimately a poor substitute for the real thing.

Should I be doing a podcast right now, there would no doubt be some kind of “best games of 2015" type list discussion thing. Right now there is no show, so instead…behold…a listicle.

One of the benefits of not writing about games for a living any more is that I can devote all of my available game-playing time to games that I want to play, and not have to slog through anything that I find boring, or tedious, or that I have to play out of any sense of obligation. There have been a number of games this year that I’ve wanted to love (Divinity, for example) but ultimately just didn’t stick with.

OK…enough preamble. Shut up and get on with it.

Not a 2014 release, I know. But my list, my rules. I think we can all agree that it was messed up for the first six months anyway, and honestly I didn’t really start playing it til the summer. I’d grabbed it on PS4 at launch and had been impressed with the visuals, but I didn’t really enjoy the campaign that much. This is going to make me sound really old, but it just felt like a cacophony of explosions and people shouting. Also, I really sucked at the multiplayer. It wasn’t until I made a concerted effort to “learn” the game in July (because I had so much free time) that it really clicked for me. Also making the switch to Xbox One seemed to help. Not sure why, it just did.

I ignored the campaign completely and threw myself into playing Conquest. I didn’t mess around with any of the 572 other modes, I just went all-in on the big 64-player epic stuff. The first few hours were so hard that I just felt stupid. Spawn, die. Spawn, die. Fuck it. Spawn, die. Spawn die…and then, suddenly, it all became clear.

It really is a magnificent game. So magnificent, that when the Premium add-on was reduced to $25 over Thanksgiving I snapped it up and downloaded all the new maps. Now the game is occupying 61GB of hard drive space on not one, but two different Xbox Ones in the house. 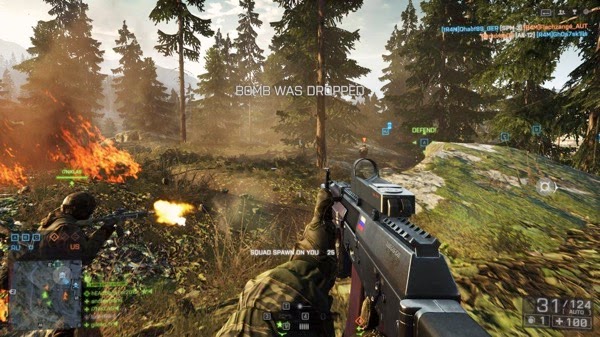 Back in March, I threw myself into Titanfall with some gusto. My logic for doing so was flawed, but ultimately it really worked for me. I’d not been a shooter guy for a number of years (probably since Quake 2, really) and I always found that trying to get into multiplayer on any existing franchise left me at a disadvantage. Even though each new Call of Duty was technically a brand new game where everyone started at zero, the fundamentals of each game were the same, as was the community. So when Black Ops 2 came out, there was already a ton of institutional knowledge in the community which meant that everyone playing was pretty badass the second the game came out. For me, that always exacerbated my confidence issues when trying the games for the first time.

So, for Titanfall my flawed logic was “new system, new franchise, new game, new community…I can get in on the ground floor as everyone is learning it.” In truth, everyone’s Call of Duty/Battlefield/Halo skills were perfectly transferable, but the important thing for me was having the confidence to jump in and really go for it.

It worked. And I had a blast. I loved the fast pace of the game, the verticality of the maps, the feeling of power in the weapons, and what a tight, pure experience it was. Reviews bemoaned the lack of a campaign, citing the omission as a weakness, but for me it was a strength. The decision to make Titanfall multiplayer-only ensured it was a super-focused experience, and it taught me to love shooters again.

It really annoys me when I see people being so dismissive of the game now. There’s a vibe in the press that because it’s top of mind for them that it’s not top of mind for anyone else. When the game is brought up, it’s done so with a flippant comment that “no one is playing it.” Not true.

I really hope they announce a sequel at the next E3. I’ll be first in line for it. 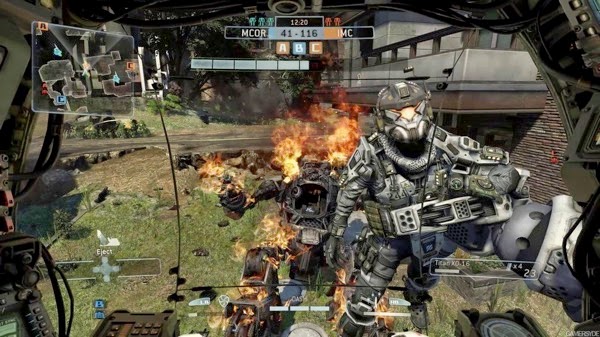 Yeah, yeah…another shooter, but it’s such a blast. The essence of Battlefield blended with the humor of Plants vs Zombies make this my biggest surprise of the year. When they announced it I think I actually rolled my eyes. It seemed like such a cynical EA thing to do; turn a perfectly charming game into yet another shooter. Because that’s exactly what the world needs, right?

Turns out it does.

I was surprised that it didn’t get much attention in 2014 wrap-ups. In the grand scheme of things, I think it was one of the best releases of the year, and there’s still a really active player base that is voraciously consuming the updates that are hitting the game regularly. 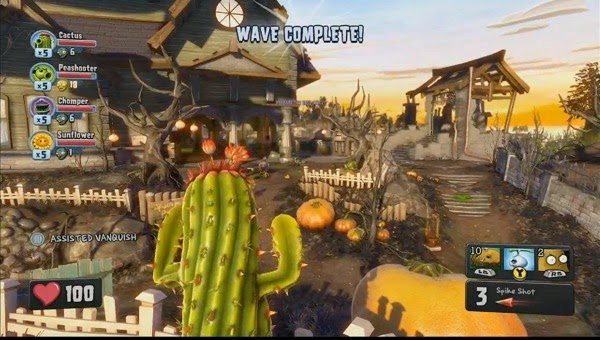 What’s this? Another shooter? This one’s different though. It was all about the story, all about the single-player, and it delivered on its promise spectacularly. Much like Titanfall, Wolfenstein’s strength is its purity and focus. It’s not trying to be anything other than what it was designed to be, which means that all of the appropriate care and attention was put into crafting something that was consistently good throughout (well, except maybe for the first 20 minutes or so, which weren’t that great.)

What was particularly surprising, and what really stuck with me after I’d finished it, was how well written it was. It’s not often that we get to say that about any game, and certainly not about a big dumb first person shooter, but Wolfenstein featured some genuinely emotional and tender moments that really helped balance the horror elsewhere in the story. 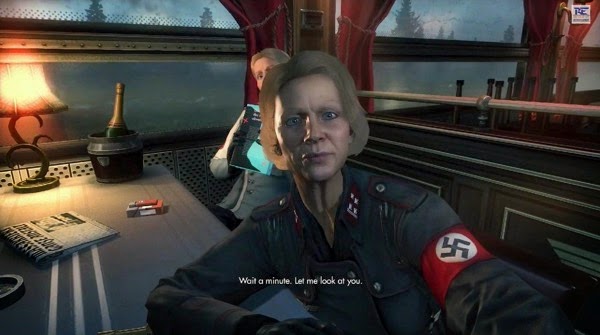 Of all the new open-world sandboxy games that hit in 2014 (there were a bunch of re-issues and remasters too, so overall GTAV still gets my vote,) this one was my favorite. I enjoyed it considerably more than the po-faced emo snark of Infamous Second Son. I appreciated the humor, and the joy that clearly went into making it. I love playing games where you really tell that the people behind it were having a blast making it, and really believed in their vision. It may not be to everyone’s taste, but I loved the day-glo crazy 90s vibe. It reminded me of playing games on the Dreamcast for some reason. 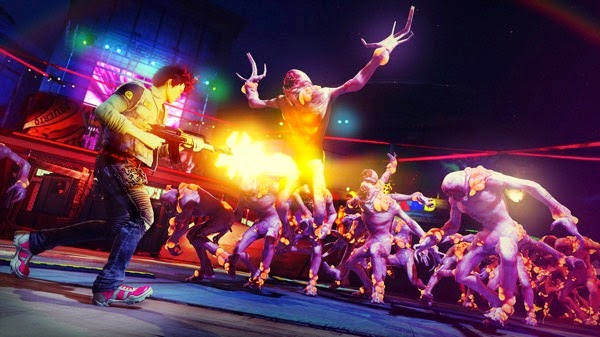 Magic the Gathering always struck me as somewhat impenetrable. There was just too much fuss and palaver about all the set up and there just seemed to be so much bullshit involved. If I’m honest, I’m a bit jealous of how into it people can be. I’d love to have that kind of patience, because I’m sure that if I did, I’d really enjoy it. But I don’t. So a game like Hearthstone is perfect for me.

Blizzard are so very good at boiling things down to the very essence and making things as enjoyable as possible. They did it for MMOs with World of Warcraft, they did it for action RPGs with Diablo (and especially Diablo 3,) and it looks like in the coming year they’ll be similarly successful with Heroes of the Storm for MOBAs and Overwatch for shooters. Hearthstone is the purest expression of this skill. They made CCGs incredibly accessible and fun…and they opened my eyes to a genre that I’d previously steered clear of.

Also: bonus! It’s on PC, Mac, and iPad - so I can play it just about everywhere. When they finally release the phone version, I’ll really be in trouble. 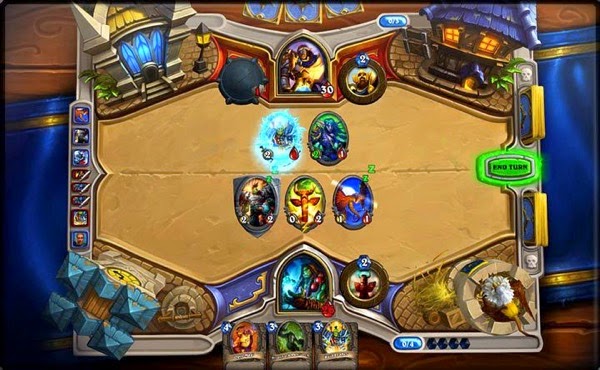